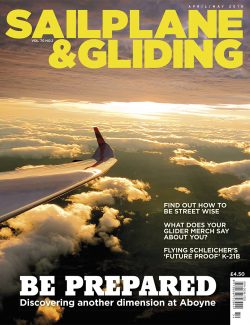 Would you like to be street wise, or find out what your gliding merch says about you? Read the April/May issue of S&G, which also reveals what it is like to fly Schleicher’s K-21B and the discovery of another dimension at Aboyne.

Keen glider pilots have a way of peering at the sky, facial expressions full of wonder and promise when the sky is lit up with cu – or with streets. Why do streets form on breezy days and what flying tactics are needed to exploit these excellent lines of energy? In the latest Aim Higher article, Tony Cronshaw talks with coach Kevin Atkinson for some expert advice.

When Amy-Jo Randalls started gliding, aged 15 and four-foot-something tall, she found it impossible to buy clothing to show off her new obsession. As an artist (check out ‘pilot with a paintbrush’ on Facebook), Amy-Jo started designing her own merchandise, sold through the Redbubble website. This has led her to observe that no matter where in the world an item goes, people buy the same products for the same gliders. So what does your gliding merch say about you?

With stiff opposition from new training gliders, Schleicher’s makeover of its K-21 came at the perfect time for Lasham, about to order its third K-21. So is this facelift enough to keep the K-21 as ‘the number one trainer’? Lasham’s DCFI, Jordan Bridge, reports some very favourable first impressions. Swedish EGU delegate Robert Danewid has also flown the K-21B and says that it has become an even better trainer.

After two weeks of flying in wave at Aboyne, Tomasz Cebo felt that his feelings were perfectly summed up by words from Jean-Marie Clément in his book Dancing with the wind: “Then the pilot will discover that there is another way to fly a glider, another dimension, and the doors will open to big flights, to his great pleasure and that of his passenger…” Tomasz praises Aboyne as a great place for trying wave for the first time, as well as getting Diamonds or doing cross-country flights one can talk about over a pint forever.

Also in this issue: BGA Chairman Andy Perkins focuses on the B word and preparing for the start of the season. Winners of the BGA trophies for 2018. Neil Goudie has 10 top tips for gliding under a future airspace environment. Tim Macfadyen shares a legendary tale of an epic aerotow retrieve. Flight Deck Wingman’s Andrew Neofytou explains how he can help glider pilots land their dream airline job. Ebenezer Grimshaw breaks taboos, dispels myths and restores reality for newbies. Justin Wills reflects on a summer of expeditions, first stop Romania. The BGA safety team starts a new series of articles, starting with rigging accidents. There’s a report and lots of pictures from the 2019 BGA Conference. BGA development officer Alison Randle looks at what we can do to celebrate volunteers. There’s a spread of stunning vintage photographs. Polly Whitehead explains Yorkshire GC’s award-winning ground training initiative. And there are many more of your stunning images in the Gallery pages.

How to be street wise

Gliding is asset to airline job

One of the Junior Nationals sponsors was Flight Deck Wingman. Founder Andrew Neofytou explains how he can help glider pilots into their dream job on the flight deck

What they didn’t tell you – advisory 10: how to get your five hours

The perils of distraction

Introducing a new series from the BGA safety team, with a focus on avoiding rigging accidents

An expression of your love?

Tomasz Cebo explains why, for him, there is no place like Aboyne

A day to inspire

Glider pilots from around the UK (and overseas) enjoyed the annual BGA Conference and AGM at the Nottingham Belfry on 2 March, 2019