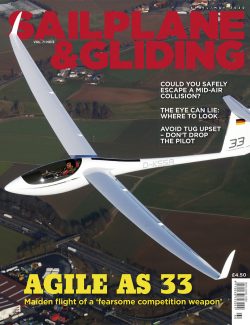 Could you escape a mid-air collision? Don’t miss advice from a top pilot, talking from experience, in the April/May issue of S&G. It also includes top tips on where we – as glider pilots – should be looking, safety advice on avoiding tug upsets, plus a report on the maiden flight of Schleicher’s AS 33.

Dealing with a mid-air collision and subsequent loss of control is not likely to be a calm and rational experience. G Dale credits his survival from a mid-air collision during a competition to having previously thought through his response to such an eventuality. Your fight or flight reflexes will kick in hard. By thinking it through in advance and being mentally prepared for the worst, you will improve the odds of surviving. G explains how you can, and should, prepare yourself.

It’s best to avoid the possibility of a mid-air by looking out properly, but this can be hard to accomplish. In the last issue, glider pilot and optometrist Paul Sheffield looked at the limitations of our vision and how to overcome them. Part two of Paul’s article looks at where we should be looking out as glider pilots. In a perfect world we would pay equal attention to all areas, but some areas hold more risk so scan patterns have to be adaptable and thinking ahead is crucial depending on where we are.

Another area of safety we focus on this issue is avoiding tug upsets. Aerotow upsets have killed four tug pilots in the past 45 years and there have been almost 80 other upsets. Some were very close shaves that could easily have ended differently. An aerotow is formation flying and demands skill and attention. You have the tug pilot’s life in your hands, so please read this valuable article from the BGA safety team.

Schleicher’s AS 33 had its maiden flight at the beginning of the year. The development team and invited guests assembled on the little airstrip behind the factory. Managing director Uli Kremer (a speaker at this year’s BGA conference) was behind the controls of the AS 33 for its maiden flight. He reported that the glider is suitable for early-solo pilots and a strong contender in the 18m and 15m Class. Bernard Eckey brings us a report on this ‘fearsome competition weapon’, which is said to trump the agility of the ASG 29.

Also in this issue: BGA Chairman Andy Perkins reports on a flurry of activity on airfields. Winners of the 2019 BGA Trophies. Keith Ashford starts the testing and type approval of a Jim Marske ‘flying wing’. George Knight reveals why his Diamond was worth the wait. Frank Jeynes flies a speedy 300km in his Arcus. Adrian Morgan takes his tentative first steps after being sent solo. There’s another ‘landout from heaven or hell’. Members of Team GB reflect on the Women’s Worlds. Glider pilots helped celebrate 90 years at the BGA Conference. Alison Randle looks at how we adequately explain what gliding ‘does’ for people. Dr Frank Voeten highlights changes to medical certification. Andrew Jarvis reflects on being part of a multi-national vintage family. Peter Holloway shares a fictional gliding tale of a D-Day veteran caught up in the mists of time. Plus many more of your stunning images in the Gallery pages.

Could you safely escape from a mid-air collision? G Dale explains why you must be prepared – before it happens to you

Lookout: how the eye can lie, part two

Flying wing is first in the UK

Diamond was worth a wait

Landing out just a few miles from the club must make for an easy retrieve? Not necessarily, as Booker’s William Parker reminisces

Avoiding the kangaroos was just one challenge faced by Team GB at the Women’s Worlds held at Lake Keepit, as bushfires raged

Glider pilots helped celebrate 90 years at the annual BGA Conference and AGM, held at the Nottingham Belfry on 29 February, 2020

Are you fit to fly?

Andrew Jarvis reflects on being part of a multi-national family

The trouble with Tommy

Revisiting a classic feature from 2001 on reading the sky ahead, by Jay Rebbeck