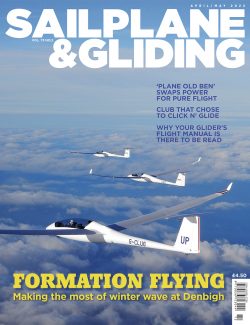 More than 30,000 people have watched YouTube’s ‘Plane Old Ben’ transition from power pilot to solo glider pilot in just three days. Find out more in the April/May issue. You can also read the story behind our cover image, discover the benefits of Click n’ Glide, and learn the importance of your glider’s flight manual.

Power pilot Ben Cornwell has been won over by the simplicity and pure enjoyment you can get out of gliding. Ben discovered gliding following a Flight Deck Wingman course. With the help of Jordan Bridge, supported by Lasham, the BGA and Flight Deck Wingman, Ben set out to go solo in just three days. The challenge was recorded for Ben’s YouTube channel ‘Plane Old Ben’. Clubs are encouraged to share the series as gliding reaches out to more power pilots.

Paul Cooper flew from Lleweni Parc many years ago. He rediscovered the magic of the site in early 2019 and has since made several return visits. Keeping an eye on potential days, at the back end of 2021 Paul launched into wave close to the site with several other gliders. With an airborne hot brief, a formation of the experienced pilots was set up with stunning resulting photographs.

Like many clubs, Portmoak took the opportunity to review its operations during Covid lockdowns. Kate Byrne explains that, while there was an initial feeling that the last thing the club needed was yet another software system, the implementation of Click n’ Glide has led to an overwhelming conclusion that it is a ‘Good Thing’. Among the benefits, there is an early perception that students are coming to the club more regularly and progressing faster.

While it may not be gripping reading, your glider’s flight manual contains some important and valuable information. Issued for the individual glider, the flight manual will sometimes alert you to unusual handling characteristics, which could have been handy for a pilot who crashed on the first flight in a glider known to be twitchy when flown with an aft CoG. It will also contain glider-specific tips, such as how to adjust a Perkoz seat back, or avoid filling an Astir fuselage with ballast water. Read it!

Also in this issue: Maeghan Sheehan talks to BWPA scholarship winner Katie Stokes. BGA Chairman Andy Perkins reflects on how working with others gives rise to opportunity. Announcing the winners of the 2021 BGA Trophies. Jon Gatfield reports on flying Rieti in his AS 33 and why you should never stop racing. Diana King is in the spotlight for our pilot profile. George Lee reviews John Delafield’s book. Nigel Pringle discovers there is no such thing as a free meal. Grimshaw comforts newbies in unhappy circumstances. Kevin Atkinson looks at fair racing. George Morris talks about recapturing the original spirit of the Wolds Two-Seater Comp. Mike Fox is amazed how much he learns during a competition. Adrian Morgan is thankful for the intervention of concerned club members. Glider pilots return for the BGA Conference. Alison Randle looks at how the Club Conference has evolved. Pete Stratten looks at the impact of current UK aviation regulation. Andrew Jarvis reports on a magnificent trailer restoration. Plus, many more of your stunning images in the Gallery pages.

Paul Cooper makes the most of winter wave, capturing some stunning photographs flying in formation with a group of experienced pilots at Denbigh

No such thing as a free meal

Nigel Pringle regales us with another tale, this time with an unexpected invitation from the field’s owner

Back to the future

Learning from the best

Mike Fox enjoys spending time with mates at a competition, and is amazed at how much he learns during the week

Time to go back to school?

Fit for the future

With Covid safety considered, glider pilots returned for the annual BGA Conference, held at the Nottingham Belfry on 12 February 2022

Alison Randle looks at how the Club Conference has evolved, enabling a wider conversation

It’s a labour of love