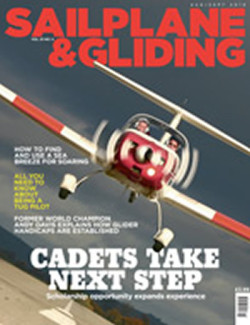 It has been a fantastic start to the season, with many outstanding flights. One of these was a record-breaking out-and-return, Dunstable to Scotland, by Ed Downham and Robin May. Read all about it, find out how to find and use a sea breeze for soaring, discover from Andy Davis how glider handicaps are established, and much more – all in the Aug/Sept issue of S&G.

Our front cover features Air Cadets. Did you know that each year 1,200 Air Cadets solo in a glider? That’s a lot of potential club members. A new scholarship scheme is enabling Cadets to expand their experience of gliding in BGA Junior Gliding Centres. Dan McCormack tells us how a scholarship is helping him develop new skills, while RAF Squadron Leader Carl Peters explains how his ATC background has proved valuable, whether flying in a gliding comp or managing the engineering effort of a Tornado Squadron.

During one of the best starts to a season in recent memory, Ed Downham and Robin May set off from Dunstable for a Scotland out-and-return and returned having set a new record. (A few weeks later, we were told, the sound of John Williams’ Antares landing, after a mere 675km early morning jaunt, interrupted a leisurely breakfast at Portmoak.)

An inland sea breeze can be a welcome source of lift when you are flying cross-country, but it is a fickle phenomenon and hard to forecast with confidence. Alan Lapworth offers valuable advice on how to find and use sea breeze. Don’t miss one of Steve Lynn’s stunning images in the Gallery this issue, which shows an isolated bit of sea breeze, identified by Ed Downham off the north coast of Wales. Steve says that when they approached it, quite well inland, it ‘almost exploded into life’.

The best candidates for future tug pilots are glider pilots with a PPL, says BGA Senior Tug Pilot John Marriott. John tells us everything we ever wanted to know about being a tug pilot, but were afraid to ask. He also highlights the importance of glider pilots giving their feedback after an aerotow.

The panel of S&G expert advisers are kept busy answering your questions. John Clark, of Talgarth, recently asked ‘how are handicaps established, and what is the chance of having a realistic handicap for the Nimbus 2?’. Former world champion Andy Davis provided a comprehensive answer, which we are pleased to share with readers in this issue.

Also in this issue: BGA Chairman Patrick Naegeli comments on the BGA’s planned move from Kimberley House to a new building, and on the range of outstanding flights flown by UK pilots in the first half of this year. BGA Development Officer Alison Randle looks at the important role played by Uni clubs. BGA Chief Executive Pete Stratten explains how the online instructor revalidation process is improving accuracy of data and paving the way for individual revalidation dates. Jochen Ewald climbs into the cockpit of the SF-25C Turbo-Falke to evaluate the performance of this lightweight club aircraft and workhorse. Steve Longland turns the spotlight on to the variometer in his continuing series on how aircraft instruments work. Duncan Thomas suggests we change the image of gliding, following a flight that confirmed to him that gliding is an unrecognised extreme sport. Martin Simons reveals how a ‘perfect’ landout on a disused runway turned into the retrieve from hell. Hugh Woodsend looks at how Airprox trends are developing. Tricia Pearson talks about the importance of travel insurance, particularly if you are one of the many recreational glider pilots who heads for the Antipodean sunshine in the autumn. Andy Cockerell, one of six potential Junior Team pilots chosen to develop their flying skills, talks about flying in the Spanish Pyrenees. Roger Emms looks at ways at reducing stress levels when flying. Last, but not least, don’t miss the truly stunning images in the Gallery pages.

A youthful energy at launch point

Alison Randle talks about the important role of university gliding. Uni clubs were amongst the first clubs to be formed when British gliding was born, and there is no doubt that young people bring a certain sort of energy to a launch point that is attractive to other prospective club members

You asked the S&G experts and, in response, former world champion Andy Davis explains how glider handicaps are established

BGA Senior Tug Pilot John Marriott tells you everything you ever wanted to know about being a tug pilot, but were afraid to ask

Flying by the seat of your pants became a thing of the past with the invention of the variometer in 1929. Steve Longland takes a look at the instrument that transformed soaring by enabling pilots to distinguish lift from sink, or strong lift from weak lift

How to find and use a sea breeze

The inland sea breeze is an extremely fickle phenomenon and hard to forecast with confidence. Alan Lapworth investigates this source of lift

Duncan Thomas suggests a way to change the image of gliding following a flight that changed the entire sport for him. Gliding is, he says, an extreme sport, full of challenges, physical demands and adrenaline

On 18 May, Ed Downham and Robin May set off from Dunstable for an out-and-return to Scotland. Despite falling 400ft short on a final glide, Ed explains how they set a new record

My kingdom for a tiger

It seemed to be a perfect landout on a disused runway, but as Martin Simons recalls, all was far from what it first appeared to be

With an incredible 1,200 Air Cadets going solo in a glider each year, a scholarship is the ideal way to further that experience

Hugh Woodsend looks at how Airprox trends are developing

Have glider, will travel

If you’re planning a trip to the Antipodes you are probably looking to book your tickets, but have you given much thought to travel insurance, asks Tricia Pearson

Six of the best

Potential Junior Team pilots were given the opportunity to develop their skills, flying in the Spanish Pyrenees. One of those selected was Andy Cockerell, who describes the Cerdanya experience