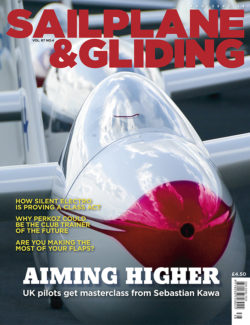 Are you using your glider’s flaps to their full potential? Don’t miss the expert advice in the Aug/Sept issue of S&G, where you can also discover why the Perkoz could become the club trainer of the future. There are top tips on successfully reading the thermalling day as it unfolds, and you can also find out how UK pilots benefited from a Sebastian Kawa masterclass.

Tim Macfadyen admits to being unpleasantly surprised at how little many pilots know about the gliders they fly. Having flown over half of the types of glider in the UK, including 40 types with flaps, Tim is the ideal person to provide expert advice on the correct use of flaps and his comprehensive article is not to be missed.

Understanding how nature’s diurnal cycle can shape soaring conditions as the day unfolds is also an essential skill to have. In the second part of an Ask the coach article, Tony Cronshaw continues his discussion with coach Kevin Atkinson on making the right decisions on a thermalling day.

Current number one in the FAI world rankings, and with 10 world championships under his belt, Polish ‘gliding god’ Sebastian Kawa recently visited UK clubs. His trip was a great success, with UK pilots inspired by Sebastian’s advice and adventurous tales and some having the opportunity to fly with him. One pilot said: “We spent our flight finding, flying along and traversing lines of energy that I would have never even considered possible.”

It’s not every day that you can fly with someone of Sebastian’s calibre, but learning in the right glider is a good place to start. SZD Allstar’s Perkoz demonstrator has visited several UK clubs. With clubs searching for a natural successor to ageing two-seater fleets, Tim Beasley has been so impressed with the Perkoz that he thinks it is the ideal club trainer of the future. With its aerobatic capabilities, it could also boost aerobatic training at clubs.

Alisport’s Silent Electro has been making the headlines with the trial in Italy of a new competition intended to refresh and invigorate the 13.5m Class. The competition, X-Italia 2016, was organised to coincide with the Sailplane Grand Prix qualifier in Varese and also the cycling event Giro d’Italia, which is second only to the Tour of France. X-Italia 2016 aimed to maximise the exposure of gliding within the media and to do something radically different. Winner Stefano Ghiorzo believes that, while the formula may not appeal to purists, it will attract a new and potentially larger audience of recreational pilots who are currently not involved in competition.

Also in this issue: Guy Roth, 16, explains why aerobatics is the perfect way to sharpen your gliding skills. Claudia Hill joins a group of German women on a mountain flying course in the Alps. Richard Cole explains why Yorkshire GC now has two EuroFOX in its tug fleet. Jon Gatfield highlights a safety device that could solve problems for FLARM users when it comes to spotting head-on alerts. David Innes attempts to take part in his first competition in 37 years. Debb Hackett reports as Willy Hackett continues his quest to fly as many Schweizers as possible. BGA Development Committee Chairman Dave Latimer explains how social media is enhancing participation in gliding. Bruce Stephenson reports on the events kicking off the vintage season. David Sibthorp reveals why Banbury junior Robert Holloway was awarded a EuroFOX Aviation scholarship. Plus, there are many more of your stunning images in the Gallery pages.

Learning from a ‘gliding god’

Making flaps work for you

Do you know to achieve the best performance from your glider? Tim Macfadyen offers useful advice on the correct use of flaps

A club trainer of the future?

In gliding we all look for that rising star. Tim Beasley explains why, with the SZD-54-2 Perkoz, he thinks it’s finally here

Guy Roth, 16, explains why aerobatics is the perfect way to sharpen your skills

Claudia Hill joins a German group to experience flying in the Alps from Lesce, in Slovenia

With in excess of 1,000 towing hours, Richard Cole explains why Yorkshire GC now has two EuroFOX in its tug fleet

Spotting head-on alerts is not always easy for FLARM users. Jon Gatfield highlights a safety device that could provide a solution

A trial of a new type of competition held in Italy in May, might ultimately have an impact on the sport of gliding. Allan Arthurs and Mattia Rigamonti report from X-Italia 2016 in Varese

(Nearly) back to compete…

David Innes reflects on taking part in his first competition in 37 years… or at least, attempting to

Bruce Stephenson reports on the events kicking off the vintage season