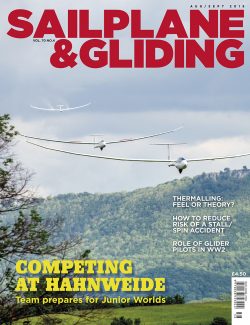 Learn how to find the right thermalling speed in the Aug/Sept issue of S&G, which also has top tips on how to reduce the risk of stall/spin accidents. You can also read about the pivotal role of glider pilots in WW2 and how Hahnweide 2019 helped the juniors prepare to take on the world.

Experienced pilots instinctively choose thermalling speeds to maximise climb rate for the thermal they are working, whether narrow or wide, weak or booming. How much of this is down to feel, or should theory guide our choices? In this issue’s Aim Higher coaching article, Tony Cronshaw talks to lead coach Kevin Atkinson about why feel and theory are two sides of the same coin.

In the UK, 35 pilots have been lost to inadvertent stall/spin accidents over the past 46 years, and another 11 through loss of control of tugs and motor gliders. In more than 200 further cases, stalling or spinning led to serious injury or damage. Most of these happened to experienced, competent pilots. The BGA’s safety team has provided top tips on how we can reduce the risk of a stall/spin accident in an article everyone should read.

This year is the 75th anniversary of D-Day. In 1942 the Glider Pilot Regiment was formed. The role of the British glider pilots was not limited to flying. After landing, they formed up into fighting units and fought side by side with the soldiers who they brought into battle. The breadth of their skills earned them the title of ‘Total Soldiers’. The Regiment took part in some of the key turning points of WW2, including D-Day, the Battle of Arnhem and the Rhine Crossing. Dr David Pasley is secretary of the Glider Pilot Regiment Society, formed with the aim of getting recognition for the brave actions of these incredible men.

Hahnweide is an annual competition run from the foot of the Swabian Alb, south of Stuttgart. It is famed for its great convergence lines and accompanying high task speeds. The fastest completed task at this year’s Hahnweide was over 400km at almost 130km/h. Peter Carter and Simon Brown, the Standard Class half of the Junior team, took part in the competition to develop their skills and work on team flying in preparation for the Junior Worlds in Hungary. They were accompanied by SkySight’s Matthew Scutter, the British junior team’s captain for the Worlds, who won the Standard Class. An enjoyable and useful experience for the juniors – and a great opportunity for S&G to showcase some of Max Kirschner’s stunning photography.

Also in this issue: BGA Chairman Andy Perkins waxes lyrical about a time of year when the most important things to worry about are fully-charged batteries, NOTAMs and a full water bottle. Garry Coppin reports from the Europeans in Hungary, where he and Steve Jones won Silver medals. Martin Roberts reports on a 750km flight that was more than perfect. Mike Pope shares a landout from hell. Ebenezer Grimshaw uncovers another area of murking gliding horror for newbies. Liz Sparrow and Kelly Teagle give an update on women’s coaching. Adrian Loening reflects on finally achieving his Diamond distance. Rachel Edwards reports on The Air League’s Soaring for Success youth programme. Justin Wills continues his tales of a summer of expeditions with flights in the USA. Power pilot Nigel Everett experiences some of the differences between gliding and power flying. BGA development officer Alison Randle looks at making your voice heard. Andrew Jarvis reports on the VGC national rally at Sutton Bank. BGA Chief Executive Pete Stratten looks at the new sailplane air operations rules. Plus many more of your stunning images in the Gallery pages.

Click here to read the full article Get up to speed with ballast, from S&G April/May 2018

Garry Coppin reports from a very wet comp in Poland, where he and Steve Jones won Silver medals in the 20m Class

As we celebrate the 75th anniversary of D-Day, Dr David Pasley reflects on the role of glider pilots in key turning points of WW2

More than the perfect flight

Martin Roberts wasn’t prepared for the emotions felt when completing a much dreamt of 750km, covering three national parks

A triple Channel crossing is the subject of our latest ‘landout from heaven or hell’, as Mike Pope explains

What they didn’t tell you – advisory 12: tenuously towing trouble

Liz Sparrow gives an update on women’s coaching, plus Kelly Teagle’s thoughts on a recent weekend filmed by ITV

Adrian Loening reflects on achieving his Diamond distance, with the help of his LS8 and long-suffering syndicate partner

Peter Carter reports from Germany, where he came third in the Standard Class, won by team captain Matthew Scutter

Descendants of Fred Slingsby and challenging weather made the national rally one to remember, reports Andrew Jarvis

Why it is good to think ahead

Continuing a new series from the BGA safety team, with a focus on some of the human factors that can lead to a stall/spin accident

One size does not fit all…