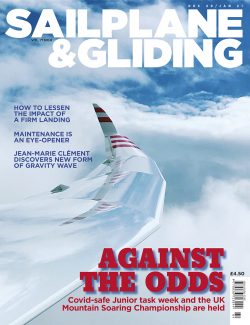 Bubbles and yellow cards paved the way for some interesting competition flying. Find out more in the Dec/Jan issue of S&G, where you can also learn about the discovery of a new type of gravity wave. Sometimes we come down to earth with a bump – find out how we can lessen the impact. Plus, how maintenance can be a real eye-opener.

When Covid-19 struck and threatened the highlight of Steve Thompson’s year – the UK Mountain Soaring Championship – he was disappointed. However, he said: “I should have known better than to lose heart. The wild and uncompromising members of Deeside Gliding Club were made of strong stuff, and they were not about to let anything as insignificant as a world pandemic interfere with their annual championship.” The threat of a yellow card, together with allocated bubbles and Zoom briefings, enabled the club to run the competition safely and successfully. Denbigh Gliding Club was also able to hold a Covid-safe task week for juniors who had taken time off and had been looking forward to competing in the Junior Nationals.

Jean-Marie Clément’s expedition to the Atacama Desert in Chile had come close to cancellation when he came up against strikes, social violence and refusal of insurers. However, if the planned ‘classic wave’ project had to be cancelled for lack of third-party liability insurance, it was brilliantly replaced with the discovery of ‘tropical wave’. Jean-Marie describes this phenomenon in simple terms, and is working on presenting a study at the next OSTIV (International scientific and technical soaring organisation) congress in 2021.

Around half of the serious injuries reported to the BGA over the past 45 years involve fractures of the spine, typically from a heavy landing. If we do come down to earth with a bump, it is the glider cockpit and related systems that protect us, but there are improvements we can make ourselves to lessen the impact. The BGA safety team looks at the benefits of using energy-absorbing foam.

Having listened to Adrian Emck’s lecture on ‘comfort in flight’ at the BGA conference, Harriet Gamble decided to make the most of some good weather to take her loan K-6 out of its trailer with the intention of some cleaning and preparation. She noticed corrosion on the trailer, which resulted in much hard work and a transformation of the trailer that should now be sound for many more years. The maintenance involved in owning a glider was a real eye-opener for Harriet and she is now confident the trailer is ready if needed for a field landing. When the first lockdown lifted, Harriet was finally able to take to the sky with a first cross-country under her belt.

Also in this issue: BGA Chairman Andy Perkins reflects on challenging times ahead, but remains confident in a healthy future for gliding. Paul Fritche is in the spotlight for our pilot profile. Iain Macdonald and Roy Garden take Deeside’s Perkoz for a wave flight. Finn Sleigh reports from the Czech Republic Nationals. Luca MacGregor and Luke Pike go from solo to Silver in seven weeks, while Allan Hopkins explains why his Silver journey took 40 years. Bruce Marshall and Pete Belcher reflect on their landouts from heaven or hell. Adrian Morgan doesn’t get the smooth return to gliding he had hoped for. A tow ball system to make ground handling less unwieldy is developed in Australia. Ebenezer Grimshaw uncovers another area of murky gliding horror for newbies. Kevin Atkinson discusses his law on dynamic mixing and flows in the thermal factory. Alison Randle looks at the importance of community. Pete Stratten reflects on building a strong future for gliding. Andrew Jarvis reports on a summer of vintage gliding. Plus many more of your stunning images in the Gallery pages.

Iain Macdonald and Roy Garden put Deeside’s Perkoz through its paces with a wave flight.

Czech out the competition

Summer 2020 will be one to remember for Buckminster GC juniors Luca MacGregor and Luke Pike. Luca reports on their speedy progress

Competing against the odds

Eventful tale of a drawbar

Bruce Marshall tells the story of a winter afternoon retrieve with a twist in the tail! Pete Belcher has a similar tale to tell

Adrian Morgan returns to the skies, but things do not go as smoothly as he would have liked

A system to make ground handling less unwieldy has been developed in Australia by Rob Brown, with Graeme Greed and Mike Burns

What they didn’t tell you – advisory 16: discovering something new… or not

Kevin Atkinson investigates in the second of a two-part article

The show must go on

Not all was lost when it came to enjoying a vintage summer, reports Andrew Jarvis