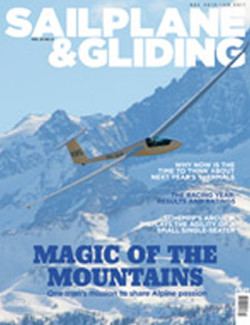 Want to make the most of the winter months or to experience the exhilaration of mountain flying? Take a look at the December-January issue of S&G, where you will also find the annual round-up of results and ratings.

When Fred Pelder caught the mountain flying bug, he wanted to find a way to share the experience and to encourage other glider pilots to give it a go. The result has been a number of stunning videos shot in the Italian Alps, which have won him first place in a video competition organised for glider pilots in the Netherlands for two years running. Our cover photograph shows a Ventus on the slopes of Blevy, near Aosta, taken during one of Fred’s flights.

Winter may be well and truly upon us, but now is the right time to start thinking about next year’s thermals. BGA National Coach Mike Fox tells us how we can make the most of the winter months and be better prepared for the coming season. It’s always good to stay in practice with your flying and this doesn’t necessarily involve pure gliding. You can brave the winter temperatures with an engine and a heater!

John McWilliam enjoyed a superb winter flight from Nympsfield at the beginning of the year, using the wave in the lee of the Brecon Beacons and Black Mountains. He urges us to try it, saying that it is a superb way to spend a winter’s flying day and still be home for afternoon tea.

Mixed weather conditions had an impact on competition flying this year (nothing new there then!), both in the UK and overseas. This issue features the annual round-up of results and ratings, plus reports from the Worlds in Hungary and from Competition Enterprise.

This issue features Jochen Ewald’s report on the Arcus M, a self-launching 20m two-seater, which delivers all that it promises. Just after S&G had printed, we were shocked to learn that Jochen had died suddenly. Our thoughts and sympathies are with his family and friends. A full obit will appear in the next issue.

Almost 100 club officials attended the BGA Chairmen’s Conference/Treasurers’ Forum in November. The key message was theimportance of change, with a positive day looking at the factors that club officials can do something about, focusing on improving the lot for you, the existing club member, and ensuring that, as a sport, we are strong enough to weather the storm.

Also in this issue: BGA Chairman Patrick Naegeli reflects on a good year for gliding as a whole, with around 1,000,000 miles being flown by UK pilots. BGA Development Officer Alison Randle looks at what clubs can do about the, often unwelcome, external factors affecting their success. With the Olympics coming to London in 2012, Vintage Glider Club secretary Bruce Stephenson talks about plans for a meeting of Meise gliders to symbolically mark gliding’s lost opportunity. Alan Lapworth investigates what goes on in the lower layers of the atmosphere, waiting for thermals. Andy Perkins looks at the scholarships available to keen junior glider pilots in the UK. Nick Bowers describes how the Bath, Wilts & N Dorset gliding club got involved in the Guiding Centenary, raising the club’s profile in the process. Last, but not least, we’ve more truly stunning images in the Gallery pages.

Wishing you all season’s greetings and safe landings

Don’t bury your head in the sand

The success of clubs depends on many factors. Some of these are easier to influence than others. Alison Randle looks at what clubs can do about the external factors, often unwelcome, for which an ostrich philosophy is rarely helpful

The importance of change for survival was the key message at the Chairmen’s Conference and Treasurers’ Forum on 20 November. Alison Randle reports on a positive day, with a focus on factors we can change

Arcus M …as agile as a single-seater

Jochen Ewald takes to the skies with the Arcus M, a self-launching 20m two-seater with excellent flying characteristics, which delivers all that it promises

Ever wondered what is going on in the lower layers of the atmosphere during the morning when two-seater training flights are being flown in short circuits while pundits are rigging their gliders and polishing their canopies? Alan Lapworth investigates

Now is the right time to think about next year’s thermals. BGA National Coach Mike Fox suggests how you can make the most of the winter months

John McWilliam experiences a superb way to spend a winter’s flying day – and still be home for afternoon tea!

Being both the met man and a competitor called for a lot of early starts. As a newcomer to Competition Enterprise, winning was an added bonus for David Masson

Listing of the top 300 competition pilots in the UK, and a round-up of regionals and nationals results for the year

Nick Bowers describes how the Bath, Wilts & N Dorset gliding club got involved in the Guiding Centenary, raising the club’s profile in the process