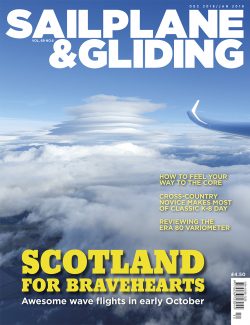 A quick trip to Northern Ireland and back, BEFORE starting a declared 720km task? Read about this epic flight by John Williams, and others taking advantage of great wave conditions in Scotland, in the Dec/Jan issue of S&G. You can also read about the Era 80 variometer, see the annual round-up of results and ratings, and continue to develop your cross-country skills with top tips on feeling your way to the core.

Visitors to Portmoak talk of the camaraderie, willingness to push the envelope and free sharing of information to enhance everyone’s performance. With a promising forecast for Tuesday 2 October, four pilots set off to complete epic Scottish flights and this issue features reports from John Williams, Ed Downham, Sant Cervantes and Roy Wilson.

As Sunday 15 July was shaping up as a perfect K-8 day, cross-country novice Gary Western set himself a task for Rattlesden’s Woody Winch Challenge. It was only his third cross-country and delivered both highs and lows. Gary reports that it was a challenging, but very satisfying 193km flight in his K-8.

Visual clues are an excellent bet when searching for thermals, but how do we locate and core the lift when the sky ahead is blue, or a sprawling cloud pattern that’s difficult to read? Tony Cronshaw asks coach Kevin Atkinson about the skill of feeling the air when locating and centring a thermal.

Steve Hunt had been flying for years with a navigation system that he found was no longer supported by its manufacturer. He needed something compact that would fit in the panel without major change and provide the functions he was used to, while also delivering substantial improvements. Researching a replacement led Steve to the LX Era 80, which he says will be a big hit with cross-country pilots at any level.

Also in this issue: Nick Bowers reflects on the challenges faced by the BGA Exec. Trevor Stuart makes history with a flight turning Fishguard. John Bridge passes on his role as National Ladder Steward to Chris Fox. Katharine York lifts the invisibility cloak on the magic that keeps our clubs running. Trent Valley organises a day for its juniors to help them bond. Paul Conran reports on the 2018 aerobatic season. Andrew Jarvis reports on the VGC annual dinner and awards. Al McNamara reflects on a bizzare retrieve during the 1999 Juniors. There are four pages of results from BGA-rated UK competitions, plus the announcement of the BGA provisional ratings list. Mike Fox and Alison Randle look at how we value our training. Pete Stratten has advice on avoiding licence bear traps. Alison Randle reports on a positive 2018 BGA Club Management Conference. And there are many more of your stunning images in the Gallery pages.

Feel the way to the core

Click here to read the full article Ways to get that feeling, from S&G April/May 17

Turning Fishguard: a first from Nympsfield

Trevor Stuart makes history with a flight turning Fishguard, and a request to make the lighthouse a turnpoint

All change at the BGA Ladder

After many years of sterling service, John Bridge is finally passing on his role as National Ladder Steward, with Chris Fox taking the helm

As if by magic: a story of the elves and the gliding club

Steve Hunt gets to grips with the Era 80 variometer with transflective 3.5in screen

Andrew Jarvis reports from the VGC annual dinner in Zurich

Continuing S&G’s new series of your ‘landouts from heaven or hell’ tales, Al McNamara recalls a bizarre retrieve during the 1999 Juniors

Pete Stratten provides an update on training and certification

A record number of clubs were represented at the 2018 BGA Club Management Conference. Alison Randle reports