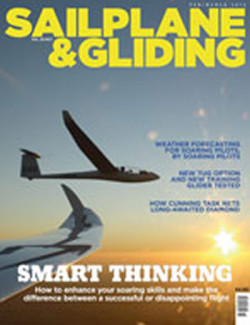 Want to enhance your soaring skills, or discover easy-to-understand soaring forecasts for pilots, by pilots? Look no further than the Feb/March issue of S&G. And if your winter training is limited to the humble circuit, do not despair – find out how to use circuits to perfect your skills.

Smart decision making can make the difference between a successful or disappointing flight. Bernard Eckey, author of Advanced Soaring Made Easy, explains how you can enhance your soaring skills with careful observation and by being mentally one step ahead.

Preparation before a flight is also vital, but no one wants to lose useful time picking out information from different sources or interpreting scientific calculations while others are already airborne. The meteorologists at TopMeteo are also soaring pilots. Bernd Fisher explains why you don’t need to be an expert to easily understand its forecasting service and be able to plan your flight up to three days in advance.

While the forecasts for local soaring were not great one August day, an inspired and cunning task set by John McWilliam enabled Eugene Lambert to achieve a long-held gliding ambition. He proved to himself that you don’t have to live in the Fens to play above them as he finally achieved his Diamond distance. Eugene flew from Aston Down to East Anglia and back again, passing places and turnpoints he had never imagined reaching in a glider.

Pilots have been putting two new aircraft through their paces recently. John Marriott flew the EuroFOX kit aircraft as a glider tug at Bicester to see how it compares with ‘conventional’ tugs, while Phil King discovered what it was like to be towed by the EuroFOX during trials at Shobdon. At Milfield, pilots were delighted to get their hands on the Perkoz. A replacement for the Puchacz, thistwo-seater is fully aerobatic, yet has better soaring potential than most training gliders.

Also in this issue: BGA Chairman Patrick Naegeli reflects on his six years in a challenging and inspiring role, as his term of office comes to an end. BGA Development Officer Alison Randle emphasises the importance of safeguarding plans. Alan Lapworth starts a series of articles on waves in the atmosphere with a look at breaking waves. Wendy Durham looks at in-flight plumbing options. Jeremy Thomson relives his first five-hour flight and reveals how gliding has changed his life in just over a year. Pete Startup recounts the tale of a ridge too far (for him and his big mouth). Nick McCloud offers advice on using circuits to perfect your skillsduring the winter. Tom Evans shares his cunning plan for keeping yourself gliding as a junior pilot. Martin Simons reflects on the days of solo training when your first flight would be in a primary glider. Vintage Glider Club secretary Bruce Stephenson writes about flying on a shoestring. Plus, there is another selection of stunning images on the Gallery pages.

David and Goliath for gliding sites

With threats of building developments – especially windfarms – increasing, Alison Randle explains why a safeguarding plan is a must for clubs

The meteorologists at TopMeteo are also pilots. Bernd Fischer explains why you don’t need to be an expert to easily understand its forecasting service

Recognition of the effects of breaking waves in the ’80s improved weather forecasting. Alan Lapworth explores this type of wave

Just over a year ago, Jeremy Thomson had never expected to learn to fly. Now he has his Silver, a share in a glider and he is about to start training as an airline pilot

A ridge too far (for me and my big mouth)

It seemed like a brilliant plan, but, as Pete Startup discovered, nothing is certain in gliding

New kid on the block

The EuroFOX kit aircraft is either a microlight or SEP/SSEA aircraft with a max all-up weight of 560kg. John Marriott flew it as a glider tug at Bicester to see how it compares with ‘conventional’ tugs, while Phil King got the glider pilot’s perspective during trials at Shobdon

Don’t despair if circuits are your main training option in the winter, says Nick McCloud – use them to perfect your skills

Pilots at Borders GC put the replacement for the Puchacz, Allstar PZL’s Perkoz, through its paces to see if it is the only two-seater your club will ever need