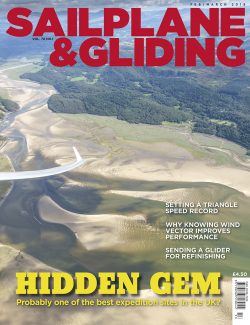 Discover one of the UK’s finest expedition sites in the Feb/March issue of S&G and find out why one club chose to have its K-21 refinished in Slovenia. There are more top tips on improving your cross-country skills, with a focus on knowing the wind vector when airborne, and you can read John Williams’ fascinating account of how he set a new 600km triangle speed record.

The beauty and soaring challenges of Llanbedr have been fascinating pilots from London GC for the past four years. After the club’s ninth return to this mountainous and coastal area, Alan Harrison reveals what the attraction is with this ‘hidden gem’ in the National Park of Snowdonia, Wales.

Gary Western found himself a little further afield when he set off on a trip to Slovenia to collect Rattlesden’s transformed K-21. Tasked by the club chairman with finding options to give the K-21 the TLC it badly needed, Gary explains why he found GliderService Novak to be the best option for the club’s glider refinish and what the project entailed.

Knowing the wind factor when airborne can help you vastly improve cross-country performance and avoid unfortunate mistakes. Tony Cronshaw talks to coach Kevin Atkinson about why finding out the wind factor accurately is a must for the soaring pilot.

A lesser known requirement when world record submissions are made is for a pilot narrative to be submitted along with the paperwork. John Williams has a habit of writing these whether strictly required or not. S&G got sight of his latest narrative, for a 600km triangle speed record-breaking flight, and saw it as a real insight into his thinking on such a special flight. We persuaded John to share it with S&G for a wider audience to appreciate.

Also in this issue: BGA Exec member Tony Smith highlights why a healthy balance sheet is essential. Neville Almond returns with an update on Kobo/XCSoar developments. David Innes gets to grips with an interesting electronic conspicuity toy. Chris Fox and Ed Downham report on last year’s Airprox, with 19 out of 128 involving gliders. There’s a true story on an arduous retrieve, with names changed to protect the innocent. Ebenezer Grimshaw breaks taboos, dispels myths and restores reality for newbies. Richard Cole reports on EuroFOX engine developments. How the Ted Lys Trust helped pilots in 2018. Tor Walberg explains why he became hooked on gliding and how he benefited from a Royal Aero Club Trust bursary. Chris Luton reports on the ICL, with the 2018 trophy awarded to Bicester. Rose Johnson proposes a mentoring scheme available to anyone at regionals level. Alison Randle looks at why succession planning is vital. Pete Stratten gives an update on the challenges faced, influencing our future. And there are many more of your stunning images in the Gallery pages.

Click here to read the full article Feel the way to the core, from S&G Dec 18/Jan 19

A triangular task in wave

David Innes gets to grips with an interesting electronic conspicuity toy

Be aware of risk appetite

When Biggles botched it up

Continuing S&G’s series of your ‘landouts from heaven or hell’ tales, this is a true story of a somewhat arduous retrieve. Only the names have been changed to protect the innocent!

What they didn’t tell you – advisory 9: the hazards of enlightenment

Ebenezer Grimshaw has a worryingly deep rummage through the learning process

Even better than before

There’s a trust fund available to all ages. Here is how the Ted Lys Trust helped pilots in the past year

I was hooked in an instant

Chris Luton reports on the Inter-Club League, with the trophy awarded to Bicester GC

Competition training for all

With comp training available for juniors and women, Rose Johnson proposes a mentoring scheme available to anyone at regionals level

With Rattlesden’s K-21 in need of some TLC, Gary Western researches a refinish and finds himself setting off on a trip to Slovenia to bring home the transformed glider