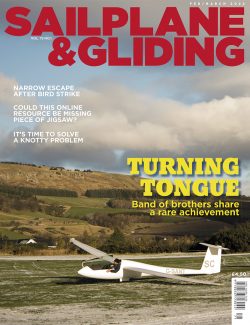 From turning a ‘mythical’ turnpoint to a narrow escape after being hit by a bird with a four-foot wingspan, you can read about it in the Feb/March issue of S&G. You can also learn about an online training resource that aims to accelerate learning, and why we should be solving a knotty problem.

Some turnpoints have a certain cachet. One of these is Tongue on the northern coast of Sutherland. Only seven pilots had previously turned Tongue, but on one day in September four pilots shared this achievement: Sant Cervantes, Roy Wilson, Ed Downham and Damian le Roux. Sant reflects: “There are some flights where the real satisfaction comes in reliving the flight in comfort at home, where one can savour the highs and lows of a demanding flight. It lives in your mind forever becoming mellow and richer with time. We relive those moments of striving to achieve that state of perfection, be it emotionally, spiritually, or being in tune with the world. All of us that day, whether we care to admit it or not, were trying to achieve that. A band of brothers.”

Canadian tow pilot Owen Hoelscher was about to turn from base to final when he got a cockpit full of turkey vulture and a bird strike story to last for the rest of his flying career. It was his third tow of the day when, at around 500ft, there was a big bang and everything went black for a second or two. Half of the left side of the windshield was completely gone. Owen saw the bird wrapped around the post that supports the windshield. He had been hit by a turkey vulture with a four-foot wingspan. Thinking he should make a MAYDAY call, Owen realised that his headset had been knocked off by the bird, along with his sunglasses and hat. He had two to four seconds to figure out what the situation was and, having established the plane was flyable and still had engine power, he was able to execute a normal landing.

Lockdown 2021 became a busy time for Simon Stannard when he realised that simulation done well would assist in addressing the widespread shortage of instructors’ time by allowing more people to teach, more flexibly, and by accelerating pupils’ progression. The missing part of the jigsaw was the material required to support the delivery of gliding lessons. Simon developed a set of gliding lessons primarily aimed at ab initios and initially intended for use within the club’s Condor flight sim at Camphill. These lessons have been published for use online at glidingschool.com  Not a replacement for instruction, uses include initial briefings, revision and assessment. Condor users worldwide are using it at home in preparation for their real-world lessons.

The BGA Safety Team highlights that a good safety culture starts on the ground. If you can’t be bothered to undo tow rope tangles before they tighten, then you probably can’t be bothered to fix safety problems either. It can be hard to step in when something’s not right, but there’s no doubt that some of the clubs with the best safety cultures adopt a very active approach to intervention. It can be reassuring to know that someone else is looking out for you.

Also in this issue: BGA Chairman Andy Perkins reflects on memorable flights and inventive uses for airfields. Alistair Webb is in the spotlight for our pilot profile. Sebastian Kawa continues the story of competing in the Grand Prix Finals and reflects on how the AS 33 performed. Chris Fox and Ed Downham report on Airprox involving gliders during the past year. Grimshaw has more unasked-for advice. Kevin Atkinson explores the pea flow experiment. Tom Sage shares a challenging landout. Liz Pike highlights the Ted Lys awards. Steve Tilling reports on a new face in gliding. Herrie ten Cate talks with Gisela Weinreich, recipient of the 2020 FAI Lilienthal Gliding Medal. Pete Stratten looks at the potential to attract new club members. Andrew Jarvis reports on vintage gliding. Plus many more of your stunning images in the Gallery pages.

Alistair recently graduated from RAF College Cranwell. Being a pilot in the RAF has been his dream for as long as he can remember. Alistair found that his gliding experience, particularly flying in the mountains, made him stand out from the competition and achieve his dream

Tow pilot Owen Hoelscher had a narrow escape when he was hit by a turkey vulture. Herrie ten Cate spoke to him afterwards

Use the radio to save lives

Is this missing jigsaw piece?

Tom Sage starts a trend, landing in what appeared from the air to be the perfect field, cunningly chosen next to a railway

Help for your flying career

A lifetime of dedication

Gisela Weinreich was awarded the 2020 FAI Lilienthal Gliding Medal for a lifetime’s dedication to promoting female participation in aviation. Herrie ten Cate talks with her

Opportunity to be discovered

More holes than a Swiss cheese!

Time to solve a knotty problem