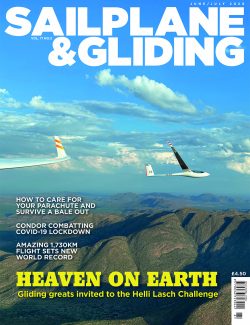 With gliders grounded, pilots have been scratching the itch with visits to new gliding sites and taking part in competitions using soaring simulators. Before lockdown, a new world record was set with an epic 1,730km flight, and some gliding greats discovered heaven on Earth during the Helli Lasch Challenge. Read about these in the June/July issue of S&G and don’t miss essential top tips on caring for your parachute and how to use it correctly to save your life after a bale out.

When Coronavirus struck, clubs rallied round with a number of ways of keeping members involved and new ways of delivering gliding activities. Condor has seen a surge in popularity, keeping pilots in the air with virtual soaring. Yorkshire Gliding Club now has a virtual soaring club, with tasks running most evenings and sometimes during the day. Initially created for its own members, anyone is now invited to join and, more recently, French clubs have been involved. With the Winter Series postponed, UK Junior Gliding arranged the CondoraVirus Championship, which proved popular with 41 junior competitors plus a number of other participants. Virtual flying scratches the itch and some of the skills and knowledge will certainly be transferable.

New Zealand’s elite glider pilot Terry Delore flew an epic 1,730km out-and-return in February. Starting at Omarama on New Zealand’s South Island, Terry crossed over the Cook Straight and into the North Island before turning around. The flight set a new Free Out-and-Return world record for 15-metre gliders. Terry has broken many world records, but describes this flight as the hardest, most challenging and satisfying one of his life. He says he couldn’t have flown further and used every bit of the knowledge gained over the years to complete a flight he had been trying to do for more than a decade.

Heaven on Earth is how glider pilots describe the Helli Lasch Challenge. The gliding challenge was introduced as a living memorial to Helli Lasch, Nicky Oppenheimer’s late father-in-law. Its aim is to promote international gliding relations, and South Africa as a glider destination, while developing the capabilities of the South African team. Each year, the Oppenheimer family invites some of the best glider pilots in the world to Tswalu, the largest privately-owned nature reserve in South Africa. Germany’s Katrin Senne was one of the pilots invited this year and she writes about some of the impressive and unique experiences enjoyed.

Following G Dale’s excellent Bale out! feature in the last issue, Anthony ‘Mac’ McDermott shares top tips on how to care for and use parachutes. BGA collision statistics 1987-2014 indicate that there were 22 fatalities and 16 successful parachute descents. While not probable, it is possible that YOU may have to bale out. Pilots from ab initio to pundit need to recognise that possibility and better prepare themselves. Mac’s tips cover the care, inspection and wearing of the parachute. He also gives advice on surviving under the canopy – the job of the parachute is to save your life, but you must take seriously the need to survive the landing as best you can. Read this article and understand that your parachute is more than an expensive backrest. Hopefully, Mac’s article will give you sufficient knowledge and the confidence to actually use a parachute in a bale-out situation.

Also in this issue: BGA Chairman Andy Perkins reflects on these strange times in lockdown. Jordan Bridge soars over an Indian city. Adrian Morgan reflects on the trials of an early solo. David Innes reports how Deeside has progressed instructor training in lockdown. Danny Richmond reports on the CondoraVirus Challenge. Harriet Gamble flies Condor tasks as she waits to fly her loan glider. Colin Slade reflects on the butterfly effect. Dr Tony Segal discovers his choice of a field for landout was not the best bet. Kevin Atkinson discusses his law on the transfer of heat and atmospheric instability. Dr Frank Voeten looks at what is entailed in getting your LAPL medical. Pete Stratten reports on lockdown and beyond. Andrew Jarvis reports on a pocket money vintage glider. The BGA safety team reports on how it analyses gliding accidents. Plus many more of your stunning images in the Gallery pages. And last, but not least, there’s the BGA club annual statistics.

A taste of India

Surviving your bale out

The trials of an early solo

Most challenging flight of my life

The Thermal Podcast’s Herrie ten Cate talks to Terry Delore after an amazing 1,730km out-and-return flight in his ASW 27B, setting a new world record

Deeside GC has progressed B Module learning while in lockdown, reports David Innes

Waiting for a chance to fly

Harriet Gamble is loaned a K-6 for a year, just as clubs closed. Undeterred, she is studying hard and flying Condor tasks

Instil a sense of adventure

It’s not worth gambling on it

Keep calm and carry on soaring

With gliders grounded, it is important to retain a ‘club feeling’. Yorkshire GC is keeping members flying with a virtual soaring club, reports Chris Booker

Atkinson’s law on transfer of ‘heat’ and atmospheric instability

‘Instability in the atmosphere is primarily driven by humidity and the changing states of water’, says Kevin Atkinson

How to get a LAPL medical