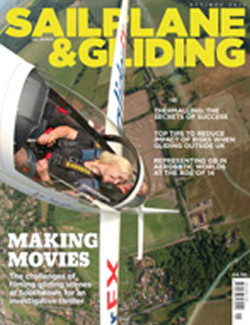 Finding and successfully working lift has little to do with good luck. It is about your skill and your ability to get as close as possible to the centre of the lift. See the Oct-Nov S&G for expert advice on how to enter and centre thermals quickly. The issue also features top tips on reducing the impact of risks when gliding outside the UK, the challenges involved in shooting gliding scenes in an investigative thriller, and competing in the Aerobatic Worlds from the perspective of a 14-year-old.

Ask the coach is a new series of articles in S&G. Aimed mainly at the beginner, there will be expert advice that we can all benefit from. In the first article, Tony Cronshaw asks Bernard Eckey for top tips on how to enter and centre thermals quickly. The chosen method often comes down to personal preferences and the type of glider we fly, yet finding and successfully working lift is about your skill and ability to get as close as possible to the centre of the lift and has little to do with luck.

Skill and ability was certainly required for the challenges faced by Guy Westgate during the filming of gliding scenes for an investigative thriller, due for release next summer. Learning to fly with a camera ship, preserving continuity, and a landing roll and precision stop in front of the cameras were all part of the experience, as actors and film crew descended on Southdown Gliding Club in July.

If you’re planning a gliding trip outside the UK, a little time spent on contingency planning is advisable. Tim Scorer, author of A Guide to General Aviation Claims Handling, offers some valuable advice on reducing the risksassociated with your trip. Legal processes abroad vary considerably and dealing with them in a foreign language can add further discomfort. Be prepared and, if the worst should happen, you will know what to do.

While Robbie Rizk’s school friends were waiting impatiently for the long school holiday to start, the 14-year-old was in Finland representing his country in the World Advanced Glider Aerobatic Championships. Perfect weather for the practice week was followed by seven days of bad conditions. Three tough days of battling it out on the airfield, resulted in the team narrowly missing out on a Bronze medal and Robbie being awarded an FAI diploma for his overall placement (9th).

Also in this issue: Claudia Hill reports from the Women’s Worlds in Issoudun. The BGA advises on the correct rigging, DI and pre-flight checks essential for safe flight. Airline pilot Valerie Stait finds her way back to gliding. Carl Peters reviews Sebastian Kawa’s Sky Full of Heat. Shaun Lapworth describes competing in the French Club Class Nationals. Liz Sparrow reports from the Unflapped Europeans at Ostrów. Liam Vile experiences his first comp, taking part in Competition Enterprise. Mike Buckland gets a prize flight in EB28 ’13’. BGA Development Officer Alison Randle provides an update on CASC developments. Michael Oakley reports on the 41st International Vintage Glider Rally. Darlton’s safety officer, Dr John Paskins, explains the thinking behind the club’s decision to invest in an automatic external defibrillator. Oxford GC celebrates its 75th anniversary in style. Last, but not least, there are many more of your stunning images in the Gallery pages.

Thermalling: the secrets of success

In the first article in a new series, aimed mainly at the beginner, Tony Cronshaw asks Bernard Eckey for top tips on how to enter and centre thermals quickly

Actors and film crew descended on Parham in July. Guy Westgate reveals the challenges involved in filming the gliding scenes

School's out to fly for GB

With a combined age of 56 for three pilots, there was a youthful feel to Team GB in the World Advanced Glider Aerobatic Championships in Finland, reports Robbie Rizk

Gliding outside the UK?

Well actually, four pilots, two crew, an interpreter and a gap year student, all for a week at the French Club Class Nationals, reports Shaun Lapworth

Unable to fly in two comps at the same time Liz Sparrow missed the Women’s Worlds this year. Instead, Liz competed in the Unflapped European Championships alongside Sarah Kelman; this year, for the first time, 50 per cent of Team GB was female

Liam Vile, 17, experiences comp flying for the first time at North Hill in the 40th Competition Enterprise and can’t wait for the next time

Prize flight is worth a wait

Picked as a winner after an S&G reader survey, Mike Buckland eventually flies with Steve Lynn in ASH 25 EB28 ’13’

Club prepared to shock you

Darlton’s safety officer, Dr John Paskins, explains the thinking behind the club’s decision to invest in an automatic external defibrillator

Oxford celebrates its 75th in style

A fast jet flypast, cake fest, dinner and evening entertainment, including a magician and live music, added up to a successful and enjoyable celebration of 75 years for Oxford GC