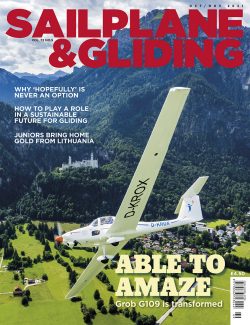 Discover how the Grob has been transformed in the Oct/Nov issue of S&G, which also reports on the British Junior Team achieving Gold at the Europeans. Find out why travelling hopefully should never be an option and the role you can play in a sustainable future for our sport.

When the Ministry of Defence offered the grounded RAF fleet of Grob G109 for disposal, Aerobility was the successful bidder. Project Able was created with the ultimate goal to bring as many of the original aircraft back into service as possible. The RAF airframes will be stripped down and given a tip-to-toe makeover, including a new engine that delivers a massive increase in performance. Aerobility supporter Guy Westgate flew the new Grob G109Able back to the UK from Germany. The flight started with an air-to-air photo flight over the fairytale castle made famous by the film Chitty Chitty Bang Bang (see front cover). During a hectic two weeks in August, the new Rotax-powered Grob G109Able was flown by 69 pilots of all abilities and was universally praised.

Following on from successful training at the Czech Republic National Championships earlier this year, the Junior British Gliding Team was awarded Team Gold in the 5th Junior European Gliding Championships held in Lithuania. There was also a Gold for Finn Sleigh in the Club Class, while Tom Pavis and Henry Inigo-Jones won Silver and Bronze respectively in Standard Class. Toby Freeland reports on what it was like to compete against the best under-26 glider pilots from all around Europe.

We are experiencing accidents, both instructing and in single-seaters, which are in the category of ‘travelling hopefully’ – when you simply hope that everything will work out despite the view out of the window. Is ‘probably make it’ a sufficient concept on which to bet your life? BGA Training Standards Manager explains why it is essential to always have a contingency plan. It might mean returning to the airfield for another launch, or landing out, but you simply can’t try something where the only other option is to crash.

With the BGA looking at a sustainable future for gliding, Richard Brickwood looks at the role that clubs and individuals can play in making this a real success. 2020-2030 Developing a sustainable future for British Gliding was published on 6 September and suggests that, whilst the BGA’s primary role is to support the whole of gliding throughout the UK, to achieve the defined aims and aspirations, external support would be required to influence, fund and drive development. To attract a suitable sponsor will require a step change in the way that national gliding is projected to the external audience of potential club members and the wider public. Find out how you can help.

Also in this issue: BGA Chairman Andy Perkins reflects on how team spirit is vital to our sport. Geoff Payne is in the spotlight for our pilot profile. Alan Lapworth investigates the evening wind. Bernard Eckey explains the thinking behind Schleicher’s AS 35 Mi. Andrea Venturini has an unexpected adventure, soaring Mont Blanc. Adrian Morgan reflects on the emotions experienced by newbies. Graham Garnett reports on a rare visit by the UK’s only ASW 12. Sam Coole reflects on his journey from newbie to Ass Cat. Grimshaw has another caution. Kevin Atkinson investigates the primary modifier. Alison Randle looks at embracing the art of the possible. Pete Stratten reflects on the importance of the right people focusing on what’s important. Bartek Kot is creating a museum to highlight Polish achievements. Andrew Jarvis reports on a summer of vintage gliding. Bill Anderson looks back at a variety of landouts. Plus many more of your stunning images in the Gallery pages.

Originally inspired by Biggles, London Gliding Club’s Geoff Payne has flown at sites all over the world, but still considers Dunstable his favourite. He enjoys instructing and says that, although he planned at 750km at 75, he wonder if 790km at 79 might be pushing it?

Alan Lapworth investigates why the wind nearly always dies down towards evening, making it a good time for first solo flights. But when, and to what speed?

An open case to success?

Bernard Eckey explains the thinking behind the new AS 35 Mi

Andrea Venturini reflects on a coincidence that resulted in an unexpected adventure, soaring Mont Blanc

Facing up to our fears

Sponsorship: the way ahead for gliding

Surrey Hills GC’s Sam Coole, 19, reflects on his journey from being a newbie to Assistant Category instructor

Advisory 21: Asking for it

Ebenezer Grimshaw has yet another caution for gung-ho confident newbies

Atkinson’s law on the primary modifier

From rain to fierce sun…

From bulls to bodyguards…

‘Hopefully’ is not an option